My daughter Lyla’s birthday party was two weeks ago and I honestly cannot believe I have not thought to share the event with you!  I even took a week off after this party to relax and get things done around the house! Oxymoron! I definitely got a lot done around the house but there was not a single day of rest or relaxation!

Let’s talk about this party, shall we? I’m a DIY person to the core. I seriously did everything I could possibly do myself for this party. The hardest part was deciding to do the party at all. My family works a lot. Most of them work 7 days a week and after 10 years of kids’ birthdays, I’ve learned not to try to work around their schedule. We knew that a few of my husband’s family members would come but only have a few close friends. So it was between a small intimate group or a large group-including all our neighbors who have grown to be both friends and family to us. My only daughter only turns one once right?!  Go big or go home, they say!

First things, first. The invitation. I’ve been wanting to learn handlettering for a while now. My wonderful husband got me and iPad Pro for Christmas and I decided to play with it to create an invitation for her. I went with a boho theme. My lettering is not too great here and I did this way before I started my lettering journey with ipadlettering.com and thehappyevercrafters.com. If you want to see my work/progress, I have a separate instagram account for lettering named Calygraphy 😜. I got 50 invitations printed at Costco (they only sell them in sets of 25). 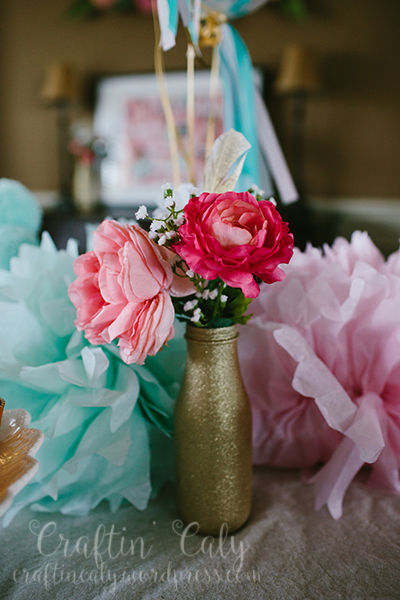 Next, I saved Starbucks frappe jars that my husband brings home from work, cleaned, and dried them. I gave them a coat if white spray paint and then blasted them with gold glitter paint. The brand I used was Krylon. Save yourself 40% at a local major craft store. I don’t buy anything without a coupon! I also got some large white feathers and spray-painted the ends with gold glitter as well. I got some silk flowers to arrange these. So many options here!

I used my Brother Scan N Cut 2 to cut out the word “one” here and you’ll see some more things similar in later photos. I love my electronic cutting machine fire things like this. 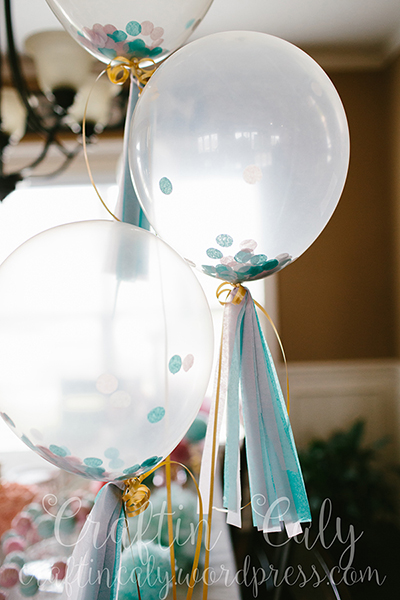 Let’s go ahead and talk about these balloons. Balloons are a huge waste of money, aren’t they?!? But you have to have them to add to the esthetics!  I wanted clear so I got a huge bag of clear latex balloons from Amazon. I cut strips of teal, white, and pink tissue paper to give them tassels.  You see the confetti in there? Yep…I punched circles using the same tissue paper and hand-stuffed 12 balloons before taking them to a local floral shop to have them blown up. 😱  I know…I’m either hardcore or somewhat over the top crazy about this decor. 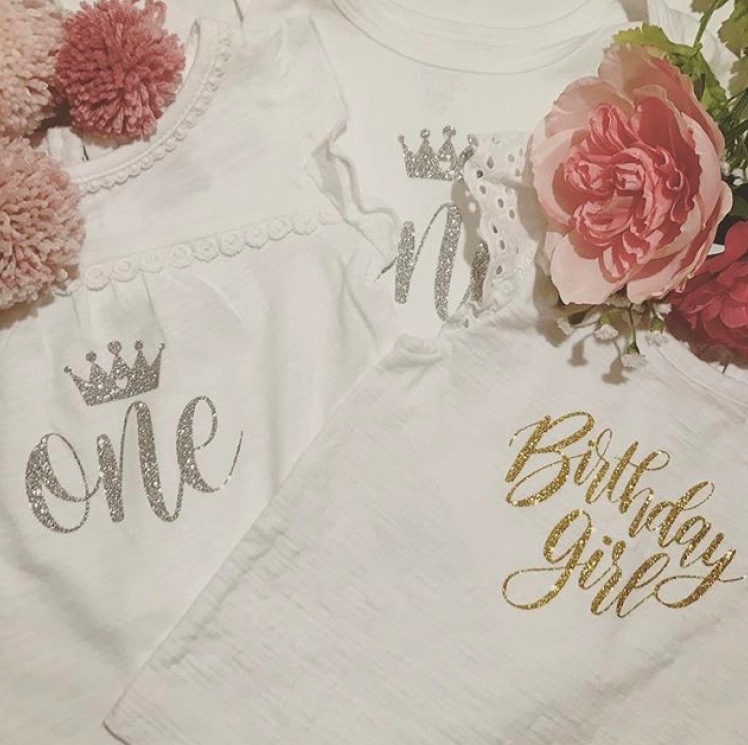 My apologies if this is a bad picture. It’s a direct screenshot from a photo I posted on Instagram.  That’s my handwriting on those teeny tshirts!!! I made two for a neighbor who turned one in March and the gold one for Lyla to wear on her birthday. 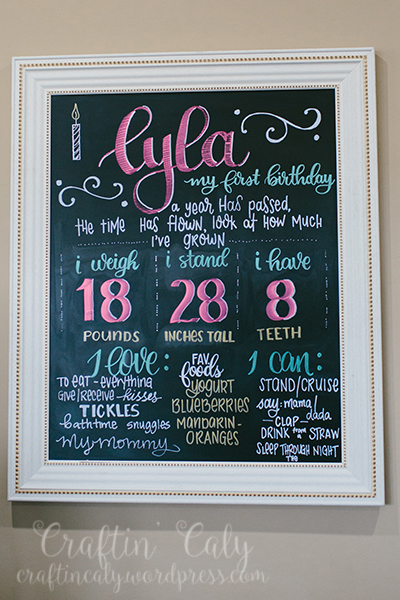 I learned a few things practicing handlettering since I created the invitation! 😜  This chalkboard is done using Chalkola markers. These markers are amazingly vibrant. So I’m going to have to say this…the company reached out to me and sent me these markers for free. First time that’s ever happened to me!  If you want some…click HERE. Enter the following code to get a 15% discount: 15OFFSTAR. It comes with a pack of metallic chalk markers that are amazing too!

This is another quick project. I usually make a banner to display monthly baby photos but decided after walking down the aisles at Michaels that I wanted a frame. I had one sitting at home all busted up without glass on it-so I spray-painted it white and hot glued twine on them. I made a bunch of Pom Poms and tied them in randomness spots to the twine. Numbers cut using my electronic cutter and got photos printed at Walmart. The backing is just posterboard. Nothing too fancy. I actually have something hanging behind it that I didn’t want to take down…got lazy…hence the posterboard. 😬🙄 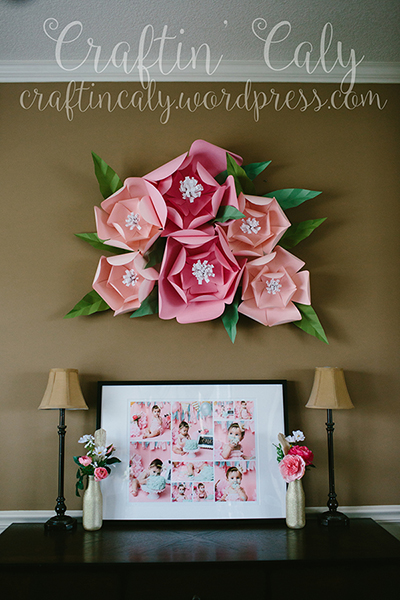 My first day off work was supposed to be a shopping day. I waited…and waited…and waited for my husband to get home. If you know anything about residents-when they say they should be off by 1pm….don’t expect them to walk through the door until at least 5:30pm. This is at least true for my husband. Nevermind the numerous times I’ve been disappointed…I’m learning slowly not to believe him when he gives me a time. So while I waited…I decided I would make a wall arrangement of paper flowers. I used card stock and cut out petals. I tend to always tweak things I see – but the tutorial I watched can be found HERE. It turned out amazing-way better than I had envisioned!

Maybe you’ll believe me…maybe you won’t…but I spent 2 days on those cookies. If you ever wonder why decorated sugar cookies cost so much-its because it takes a lot of time and detail. Ok…so a few hours to bake them on one night…and at least another 5 to decorate them on another. Making royal icing and coloring them to your liking takes at least another hour. It’s no joke. It’s a definite labor of love. 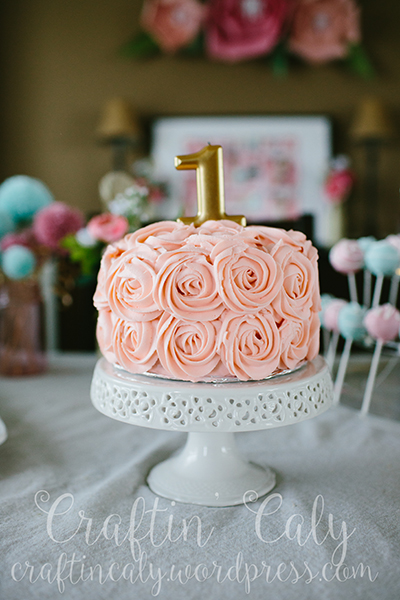 I spent another day baking just cakes, cupcakes, and cake pops. I made a cake just like this the week before in teal for Lyla’s smash cake photos. You can see it in the photo above below the paper flowers on the wall. So for the party-I thought I would make a pink one instead. I also baked vanilla and chocolate cupcakes with frosting in the same colors.

These were simple and took little time compared to everything else I did. Gold cupcake liners for the win!

Don’t look too closely-they are far from perfect. The stand is a Deflecto brand that is versatile. I found it on Amazon-there are lots of different options!  These cake pops were a huge hit with the kids and disappeared first! 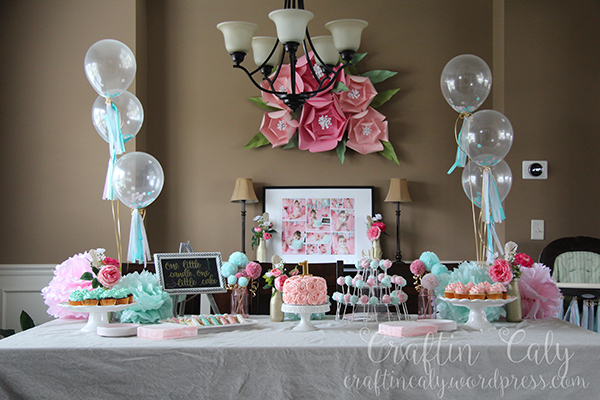 I also had a spread of savory appetizers which were only touched by adults and is nothing too amazing to share. But that’s a wrap, Ya’ll!  It was a full-house!  Hardly any room to walk at all and I was so happy with the outcome!  It’s also a relief that it’s over! Phew! 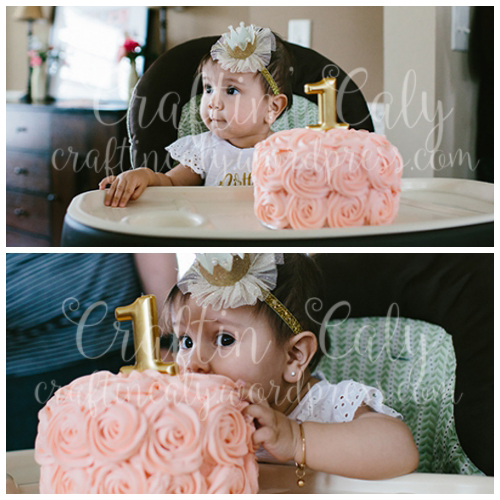 I can’t leave you without a tease of Lyla and her cake. I hate to post a personal photo so I’ve tried to put a big watermark over the image (for the unwelcome who might try to save the photo regardless…you are trespassing and violating my wishes). I hope everyone else enjoys viewing my post and can get some wonderful ideas for their next party!

Thanks for taking the time to leave me a comment! Cancel reply

I appreciate you stopping by today! I'm excited to share what I make in hopes that I'll inspire you to create and spread cheer one card at a time. Have a blessed day!

Looking for something? Find it here: